Fandom page with most of the old Squats canon: https://warhammer40k.fandom.com/wiki/Squats

I've got some old issues of white dwarf in the loft that am sure covers the Squats - will see if I can dig them out, I'd be keen for a new race with its roots in the Imperium

I'm wondering if we might see Squats as part of the new Necromunda ash wastes game first?

It would make sense in terms of a limited number of models to begin with, and tie in nicely with some of the lore about them (land train!)

I think that's already confirmed. Sure they announced a Mercenary type character. We may see a full gang though or possibly a kill team.

No doubt they'll be more OP than harlequins

Man the new Horus stuff is very temping but I want to move away from painting armour to improve my skills.

but i have inherited a little collection of old Warhammer 40K "space orks", vehicles and other bits, some of them are metal

they are mostly built but unpainted.

I have none of the paints or brushes to finish them off and dont think i could do a good job anyway even if i did.

If someone here would like to practice their painting skills on them then i would be happy to post them to you as long as you send them back afterwards.

Well, 2000 pt matched play game. My salamanders against mates eldar. Had him nearly tabled by my second combat phase. He was just incredibly unlucky with his dice rolls. I had some very lucky rolls from my eradicators against his avatar which destroyed it in one round of shooting. He had an awesomely planned deepstrike which went hideously wrong thanks to a cracking auspex scan and some brilliant armour saves on one of my redemptors.
At the start of his second turn all he had left was a spiritseer, 5 dark reapers and a falcon on 5 wounds which was locked in combat with my remaining redemptor.
I lost 3 aggressors (combat with the avatar) and a redemptor. Took 2 wounds on my chaplain on bike and that was it.
Last edited: 18 Apr 2022

Had my first game IRL last weekend, 1500pts of my Ork Goffs vs friends Blood Angels.

Could have easily overwhelmed him but i'm a n00b and forgot advancing was a thing haha, so once big Ghaz had been taken off the table in my turn 3 he managed to pretty much table me, even though I was ahead on VP at the time he would have eventually overtaken so conceded at the end of my turn 3!

Live and learn, but had great fun and will be advancing straight across the board with my boyz in our next game to tie him up and get him scared!

So I had a mini repainting project, as I fancied painting a Dreadnought. The green one (apologies for the sideways picture) was painting a good 10 years ago, when I first started painting but didn’t actually know anything about Warhammer

the second must have been 4 or 5 years ago when I picked up my first Blood Angels.

The latter pics showing the repaint. 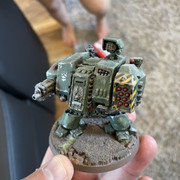 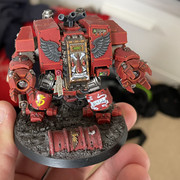 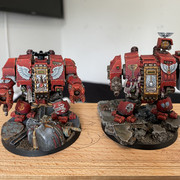 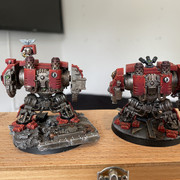 Nice, I wish I still had the eyesight to do with sort of thing but I sold all of my stuff a few years back..

Another game today. 2k tempest of war. My salamanders against a friends blood angels.
His list was a recent tournament winner. 3 big blobs of sanguinary guard, two eradicator squads, bladeguard and some other fluff. Very potent.
I went with my standard battalion.
I managed to get first turn and he'd made the mistake of deploying his infiltrators on two forward objectives but with no support. Having no other targets in range for the majority of my army I unloaded in to them and wiped them out. This left both objectives under my control but with a lot more units on them and...importantly out of line of sight and range of most of his army, this also bagged me all 3 of my secondary objectives.
This then meant he moved and advanced resulting in very little fire coming my way on his turn.
He then made a lot of spicy charges in the centre. I chose to intervene with Adrax which worked well. He took a charge of 7 sanguinary guard for only 3 wounds killing one in return. His chapter master hit my chaplain putting 3 wounds on him for none in return. I also lost an aggressor to the sanguinary guard.
Turn 2 I found myself in range of a lot more of his army. Managed to delete a unit of sanguinary guard, his 5 man inceptor squad and a smattering of wounds elsewhere. My apothecary undid all the damage I'd taken.
Then it came to combat. My chaplain whiffed against his captain but my bladeguard absolutely minced him. One of my dreads did nothing against his sanguinary guard however adrax managed to batter another 2 in to a pulp. They then took a couple of wounds off the dread before the aggressors battered another couple. This meant they broke and that was it...gone. I held the central objective completely uncontested scoring another secondary and a load of primaries.
He again found himself in a position where he could reliably target very little of my force. He managed to wipe an aggressor squad with some incredibly lucky rolls from an eradicator squad and took out 2 intercessors on the opposite flank. He then realised he had nothing in charge range. Hadn't scored any secondaries. Had scored only one primary.
I got as far as completing my next movement phase. By the end of this I held all but one objective and had his entire force within firing range of my entire force. Not only that but charge range too (minus my intercessors sat on objectives at the back). He unfortunately capitulated.
I ran the dice anyway for my own curiosity and wiped out all of his remaining units on my right flank. My centre castle then took out his remaining eradicators and librarian. My left flank then left just 2 sanguinary guard and 1 bladeguard alive to take the charges.
The sanguinary died to my chaplain and aggressors. Failed all charges on his bladeguard but he was cooked by overwatch fire when he charged my aggressors.

Overall I think things were quite easy due to poor deployment from him and too little aggression on his first turn. Armour of contempt, cover and sanguinary guard make for massive firepower sinks. Took so much to kill them! He spread his characters out too thin and took them away from the units they should have been buffing. The only one I screwed up on was placement of my techmarine but didn't want to group all my characters together.
Chaplain, apothecary and Adrax together make for a re-roll fest and great longevity. Bounce out of one fight and in to the next on full health.

Think I need to up the contrast. My edge highlighting is getting better 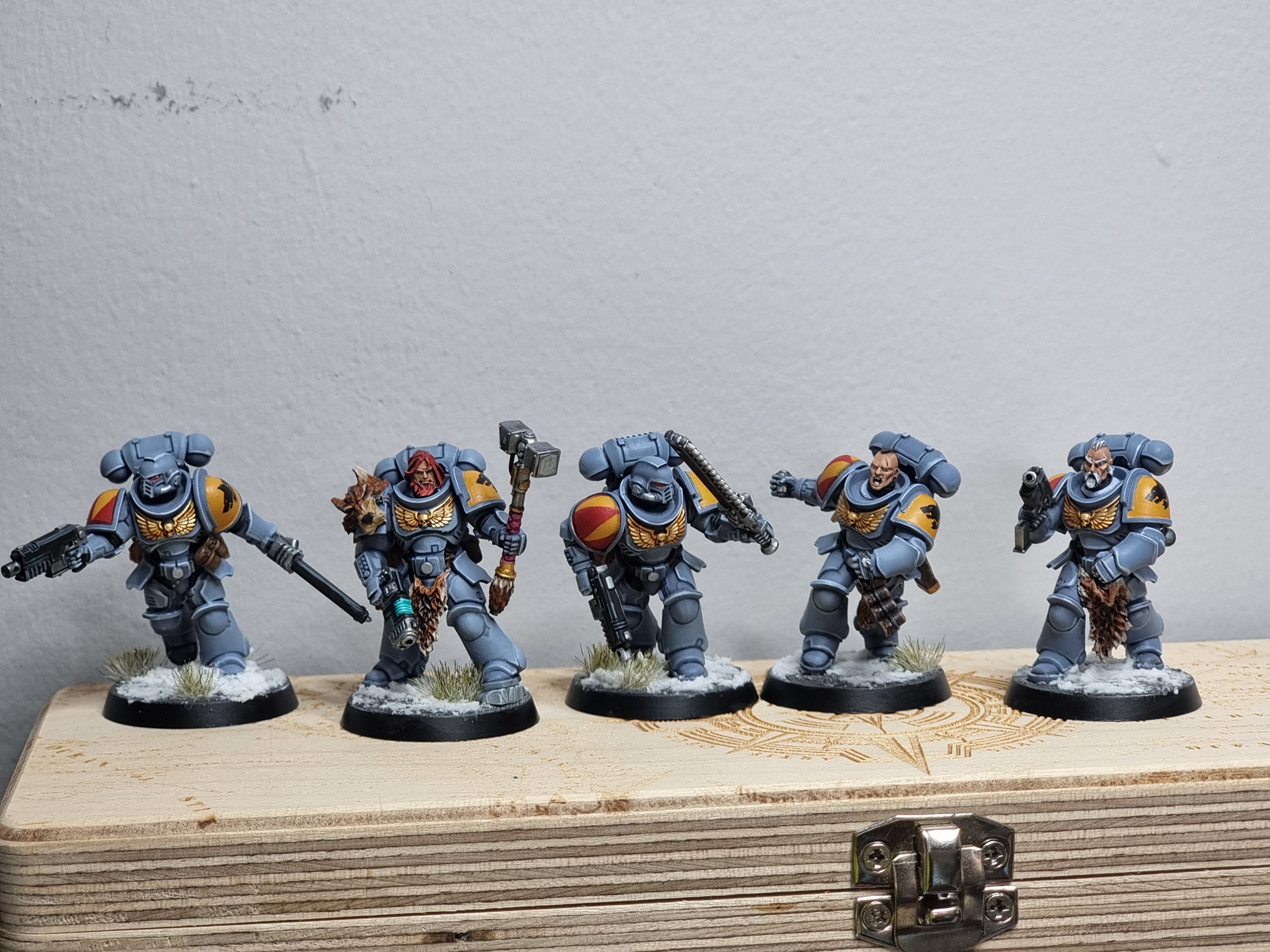 Those look good Bigpig. Contrast always seems to be feedback I see people suggesting, can never have too much of it.

I'm still slowly converting and tweaking my StormCast. Not even doing that much with them but I've been trying to sculpt onto the helms. The helmets are tiny, smaller than the actual head options. One of the things I've been doing is removing spikes so I've been trying to build up the helmets so they're more realistic shape. My sculpting skills are woefully inadequate though. Do wish I had a resin printer to do them but can't justify one.

Still not painted a single one yet either, although have the scheme and techniques I want to try all written down.

The new stormcast models are amazing and dragons!!

Knights Excelsior scheme is cool but the standard Hammers of Sigmar is pretty hard to beat.

Progress so far on my Orks. Many many many to go 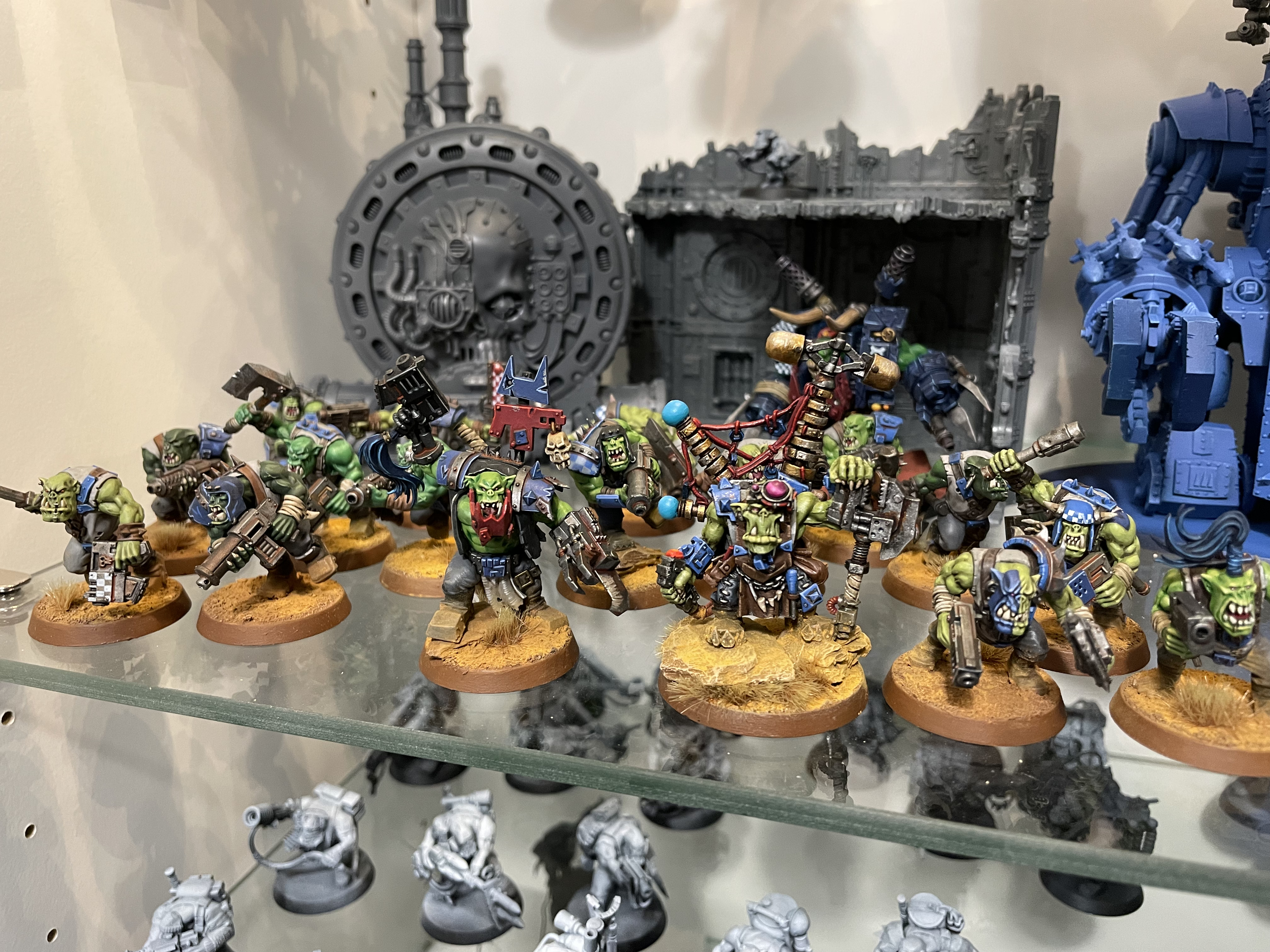 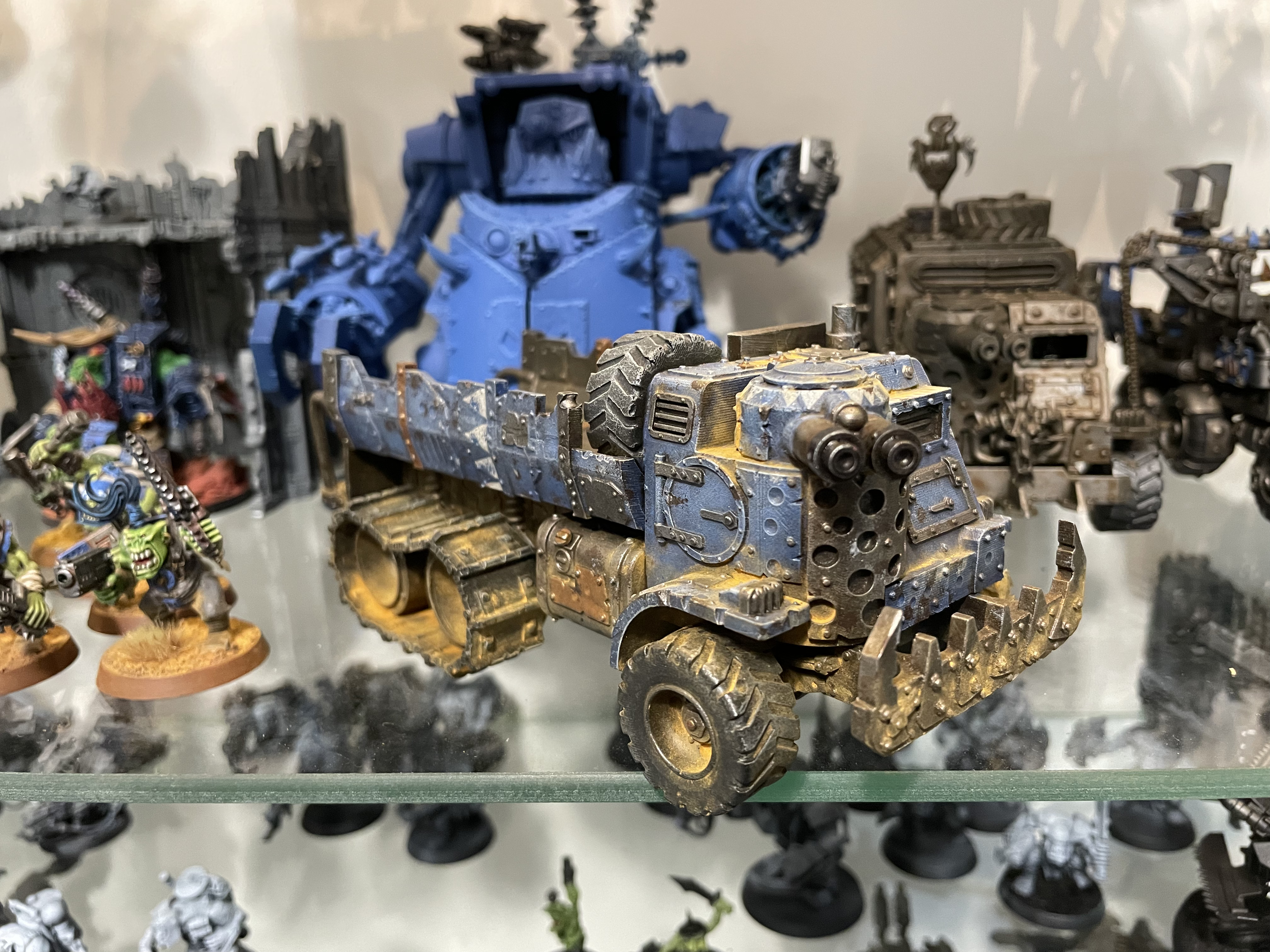 Love it, another Orks fan here!

Wish I had your painting skills however, love the Boy with half the blue face.I've committed to contrast 100% now as I just don't have time to learn to paint to the level i'd like, and contrast allows me to get a decent quality finish in a lot shorter time!

I've spent the last few weeks smashing through my pile of shame and have got all of this built ready for priming in the next few weeks.

Only the Beast Snagga Boxset, Combat Patrol and the Kill Team Models left to build but they can wait until i've finished painting this bunch

Ahhh, I remember the days I could see well enough close up to paint pupils in the eyes of my Blood Angel Army lol

So gave in and ordered my copy of HH: Age of Darkness. The local hobby store was selling it for £135, they also bought back my untouched Krule Boyz from the Dominion boxed set that I’ll never use for £50, so ended up getting it for £85. Reight bargin!

wordy said:
So gave in and ordered my copy of HH: Age of Darkness. The local hobby store was selling it for £135, they also bought back my untouched Krule Boyz from the Dominion boxed set that I’ll never use for £50, so ended up getting it for £85. Reight bargin!

Thousand Sons or Word Bearers I think.
Click to expand...

Love it, another Orks fan here!

Wish I had your painting skills however, love the Boy with half the blue face.
Click to expand...

Thanks, I’ve been trying to get quicker with the rank and file and I am getting there but I find it really hard not to spend too long!

I was really happy with the blue face, going to do a bit more of that on the next batch.

I’m the same as you I have a massive pile to work through and I keep accidentally buying stuff. Might have picked up a Stompa yesterday…. Still, it’ll keep me busy and I’m determined to finish them all, it’s just about finding time for me with job, toddler, other hobbies… same story for most of us I think!
You must log in or register to reply here.
Share:
Reddit Pinterest Tumblr WhatsApp Email Share Link
Top Bottom